I don’t usually write about myself. Often, whenever I have something new that I’m finishing, the blog goes quiet. But a little self-promotion is in order, especially since readership of my blog recently spiked to double figures. (I’m still trying to figure out if there was a reason, or just mass hysteria.)

This coming Monday, November 12th, I’ll be performing a Bent Metal, a new work for laptop performance. The concert, EM | Two, is at BSU’s Sursa Hall at 8 pm, and listed as part of SEAMUS’s ElectroAcoustic Music Month. Laptop performing is a relatively new area for me, and so far I’m still wrestling with software right up to performances. It’s easy to notice how un-relaxed I look in this photo taken by Matthew McCabe while I did my soundcheck for the premiere performance at the Third Practice Festival in Richmond, Virginia. 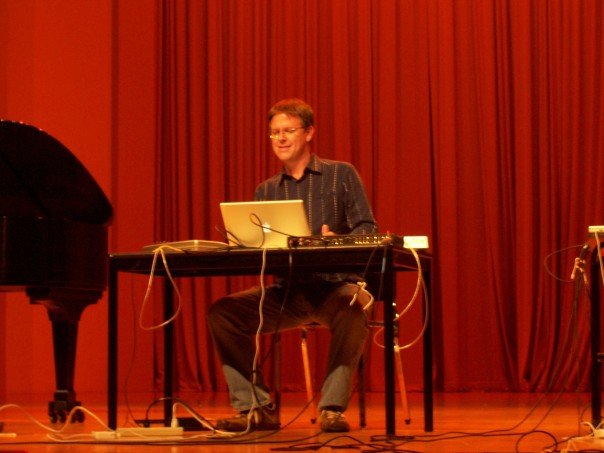 The nice part: McCabe was running the FOH sound at the time. He was clearly struggling to keep up with me.

So if you’re in the area, stop by for the latest refinements in my laptop technique. Some guests from a little school to the south will be up as well.